I got my new snowshoes yesterday! MSR Evo Tour 22, which is a completely different model compared to my old TSL 217’s. I wanted a different shape of snowshoe because I’ve had some issues with the round form of the TSL’s, but the biggest improvement is with the straps. The rubber straps are so much better than the canvas straps and buckles in the old snowshoes (and TSL seems to agree with me because even they have given up on that old strap system in the current models). 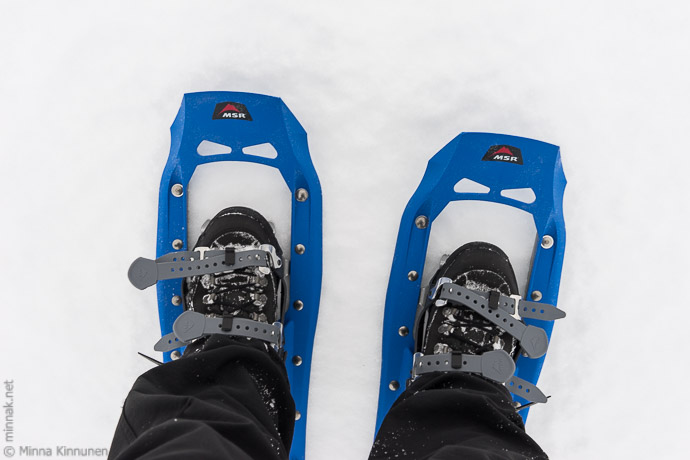 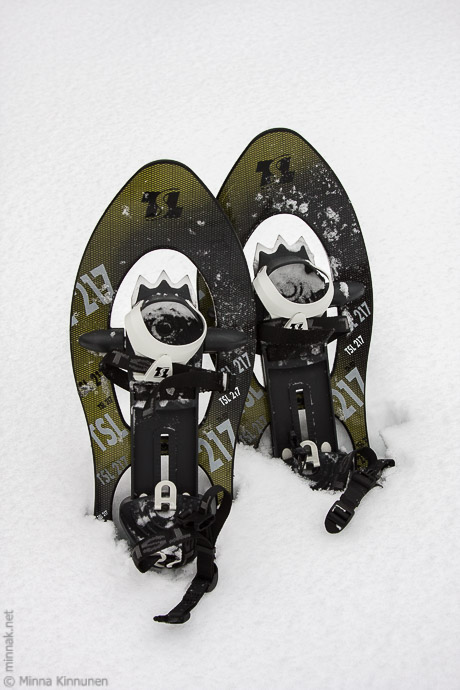 I drove to Ramundberget, my idea was to follow the Fältjägarstugan trail to the tundra, then go over Gruvvålen and join the ski trail down to Ramundberget. I made three assumptions: 1) The trail towards Klinken is already packed snow so I could walk without snowshoes 2) some snowmobiles would have taken the Fältjägarstugan trail (even if it’s forbidden for snowmobiles, but I saw some had gone there last winter anyway) so I would have hard tracks to follow 3) The snow on the tundra would be icy and easily carry me on the snowshoes.

Well one out of three ain’t bad? I was right about 1), partly right about 2), and mostly right about 3). It’s the 2) that gave me a real challenge. A snowmobile had followed the trail, but it was before the big snowfall earlier this week. I sank a little bit in the snow, but no more than what was left of this week’s snowfall. And I really started to like my new snowshoes, they felt light at the feet and it was easy to walk, so it felt like it was going to be a great trip.

But then about halfway up, I had to go in a different direction the snowmobile tracks. Oh boy. Without the hard track, I sank. Deep. But I was absolutely determined about reaching the tundra in any case, I mean I had come this far up, I was not going to turn back! I had to stop every 50m for a breather. Man it was tough!

I finally got above the forest and was relieved to find that the snow indeed did carry me up there. Most of the time. I couldn’t relax at any point because occasionally my foot broke through the thin icy crust of the snow. And then when I lifted my foot, the snowshoe got stuck under the icy crust, at one point sending me face down in the snow. Yeah, I was definitely not going to go over Gruvvålen, instead, I just searched for the best way down. The valley side can be quite steep in places, so I figured my safest option was to follow the summer trail going down from Glimtjärnen. Even if the snow was just as deep and soft along the trail, at least I was familiar with the route because I’ve done it in the summer.

And I can tell you that it was hard work going down as well. I didn’t need a breather every 50m, but I had to lift a lot of weight with every step. When I finally reached the hard packed snow on the ski trail, I wanted to get down on my knees and kiss it. This little snowshoe trek was only 5.4 km but I needed 2.5 hours to do it!

So tomorrow, I’m thinking that I will sit on the couch. Drink coffee. Eat ice cream. If I go anywhere near the snowshoes, please shoot me!

No contrast today so you can barely see my tracks, but I hope you can make out the sinkhole. And it was like that all the time in the forest.

I think I will file this one in the category “what the hell was I thinking”.

Find out more or adjust your settings.