I have a new favourite place in Iceland. Kerlingarfjöll! I could easily spend a vacation in this one place alone! It has both the big and small landscape and fascinating details, all shrouded in the steam from hot springs and fumaroles. And to think that we almost missed out on it, as the torrential rains last week had washed away a bridge, so the only option was to ford. But luckily the creek wasn’t very deep and we got over, and the happiness when I saw the landscape open up ahead… it was just one big WOW!

We had lunch before hitting the trail. Drinking coffee in the calm weather with the sun slowly breaking through the clouds and revealing the beautiful snow capped mountains around, with the smoke from the fumaroles decorating the landscape… it’s hard to imagine anything better!

Walking in between the hot springs and fumaroles was an experience in itself. At first I hesitated – I was the first of our group to go down in the valley so when I came to the first spot where I needed to get over some steaming water, I took a few steps back. But I saw that other people had walked there, so I mustered up some courage and got over (expecting my shoes to melt at any moment). After I while I got used to it, but I never lost respect for the markings so I followed the trail carefully and didn’t step outside whenever some area was marked as unsafe. I don’t want to get boiled alive…

With the water bubbling from underground, the sand (and mud) was quite soft, so you also needed to be careful not to slip when going up and down those hills. And the mud is really sticky, try as I might, I could not get it off my boots after they got smeared. Not even when I took a few steps in that hot water!

One thing that you cannot see (or smell) in the pictures is the stink from the fumaroles. Sometimes when you walked through the smoke, it was hard to breathe and I even felt nauseated a couple of times. Imagine the forces right under your feet, with that thin crust of earth as your only protection, like walking on (rotten) egg shells. But when you saw how the light was playing with the smoke and how the wind was sculpting it, it just filled me with awe. The lines, shapes, light… such beauty!

But all good things come to an end, and so we had to leave Kerlingarfjöll. We had a long drive to get to Mývatn for the next three nights, and seeing that the weather forecast was threatening with snowfall tomorrow, I was hoping that we wouldn’t have to get up too early. It’s a vacation but not the kind where you get a lot of rest! 😉 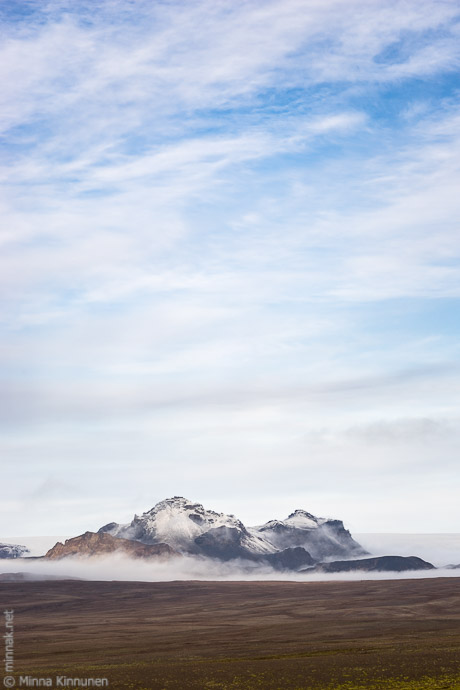 That’s Langjökull in the background. The fog get coming and going and moving quite fast, we left when the mountain was completely covered by it. 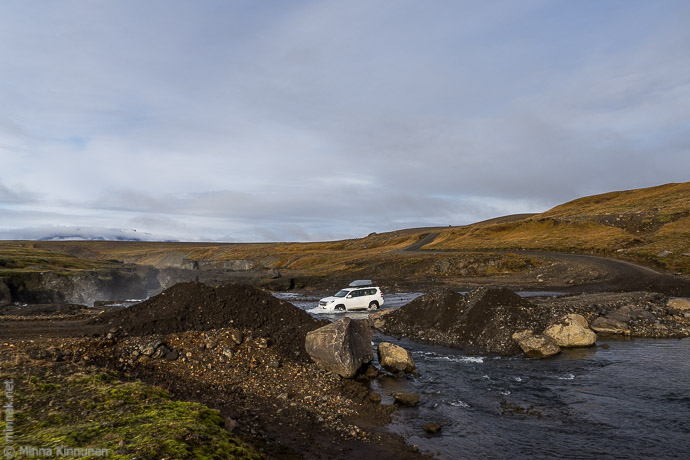 Fording the creek with the bridge AWOL 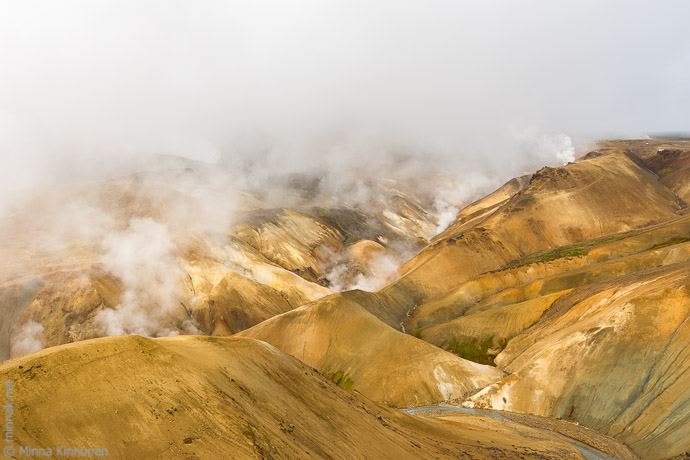 First look inside the Kerlingarfjöll massif, the clouds are low but the sun is starting to break through. The picture does not make justice to the landscape! 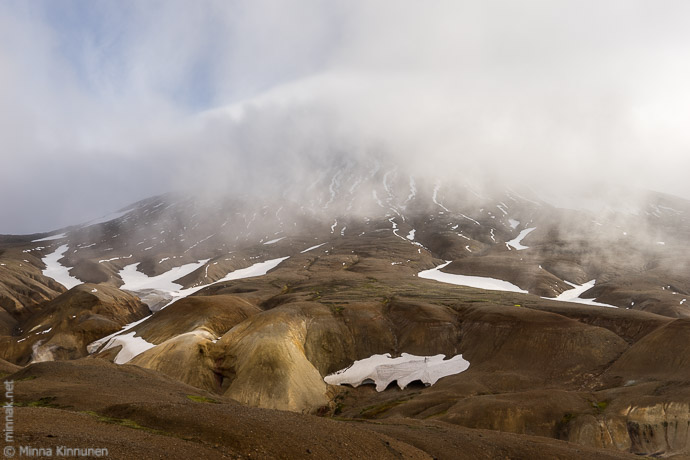 I was eating my lunch with my back turned to everyone else, just so I could see how the clouds were lifting from the mountain. In between bites, I snapped a shot. 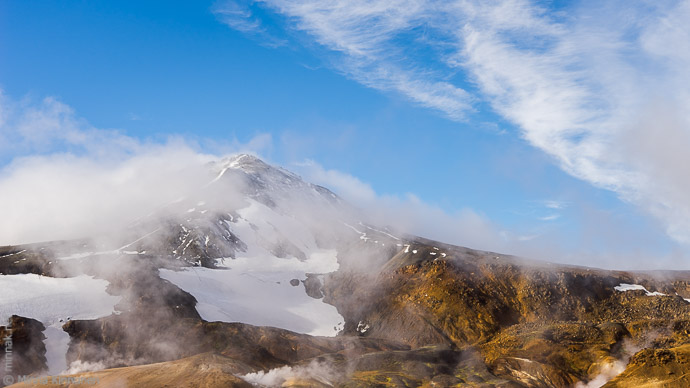 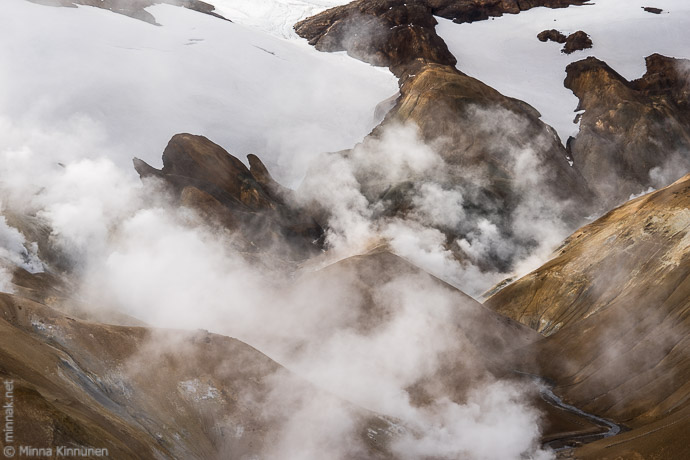 Hot and cold – fumaroles and glaciers. Iceland in a nut shell! 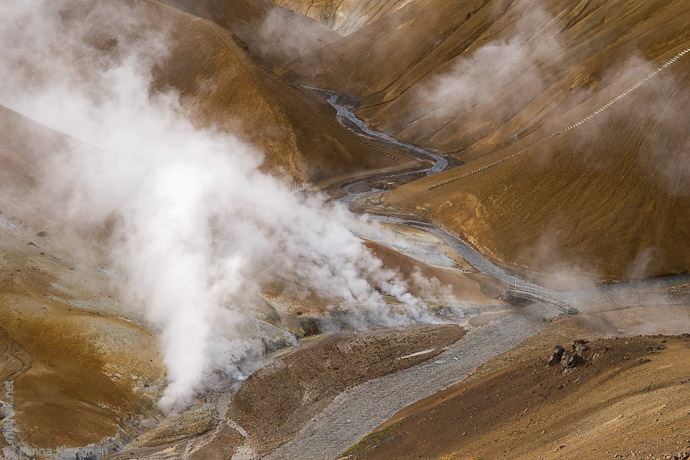 First job was to walk over the bridge and past the boiling water, and then just follow the trails up and down the hills. 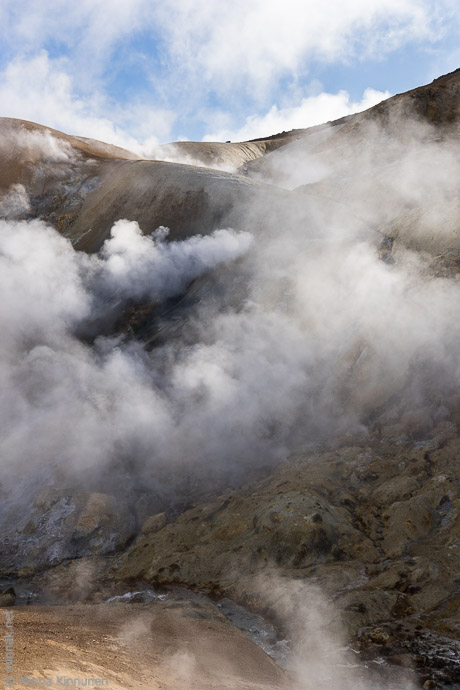 When you see the smoke coming from the sides of the hills as well, then how solid is the ground you’re walking on? 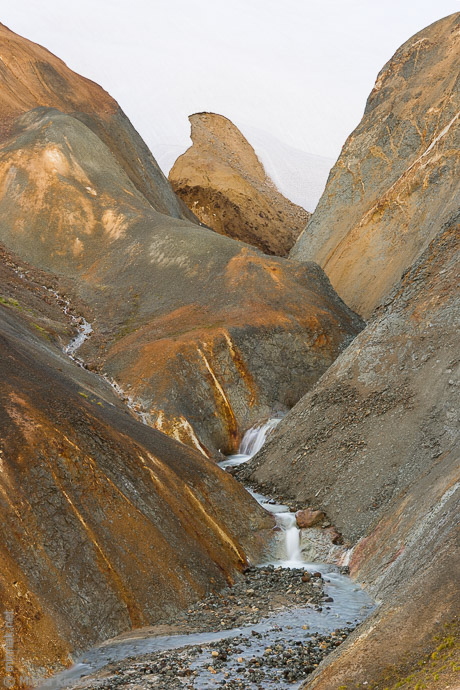 The top of the picture can be a bit trippy. It’s a glacier, not the sky. 😉 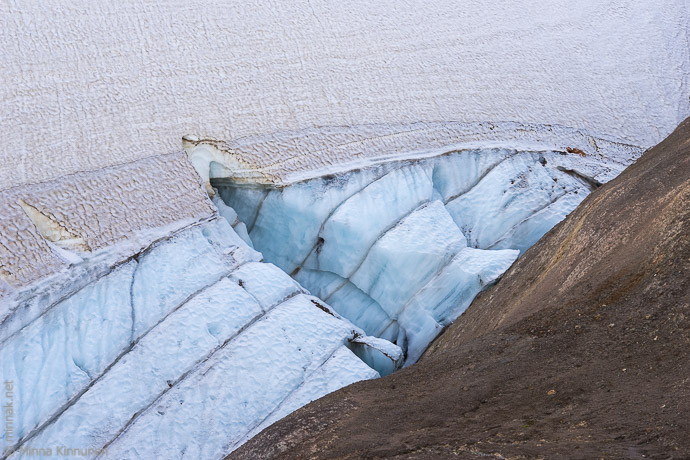 And here’s a glacier closeup 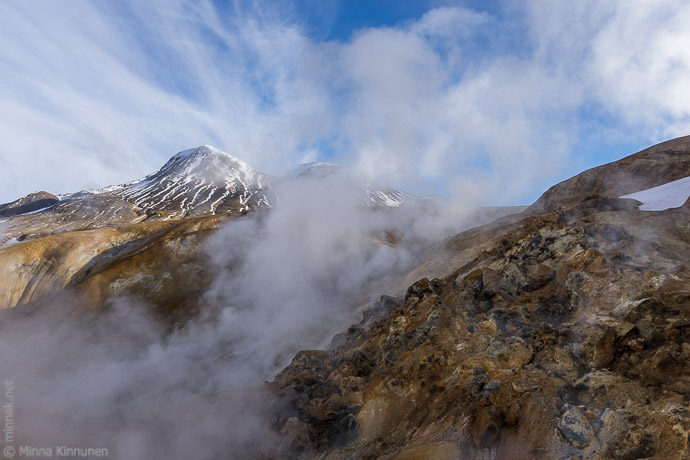 The smoke blends with the clouds 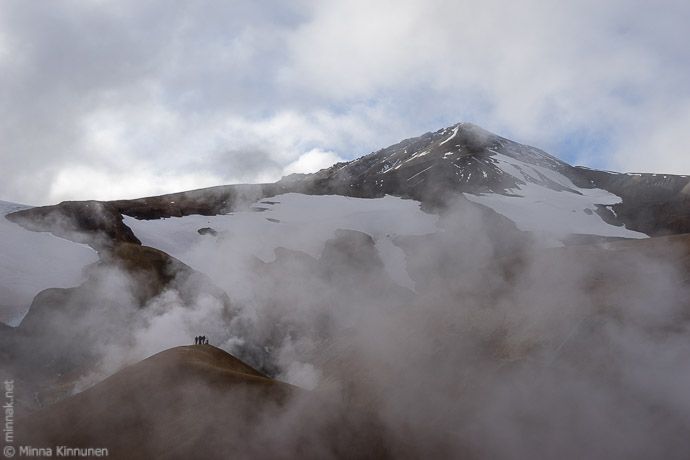 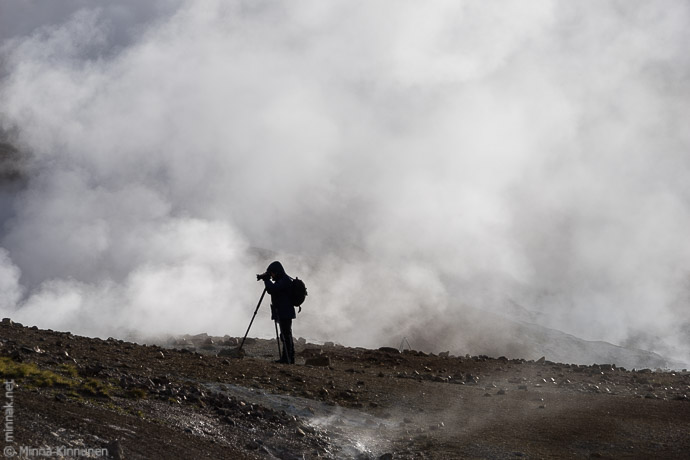 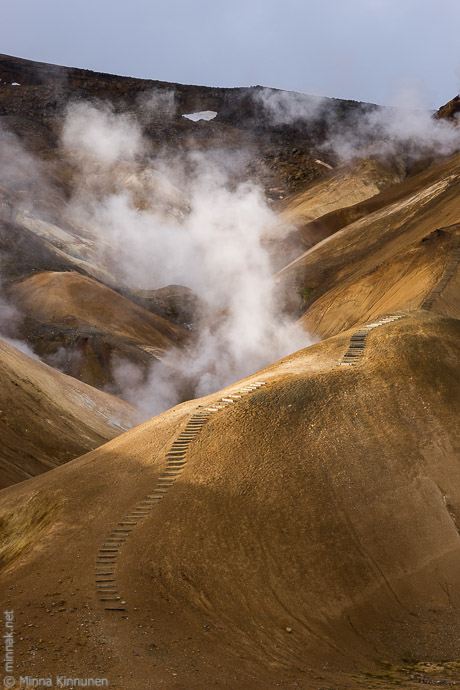 Last look into Kerlingarfjöll. I was sorry to leave! 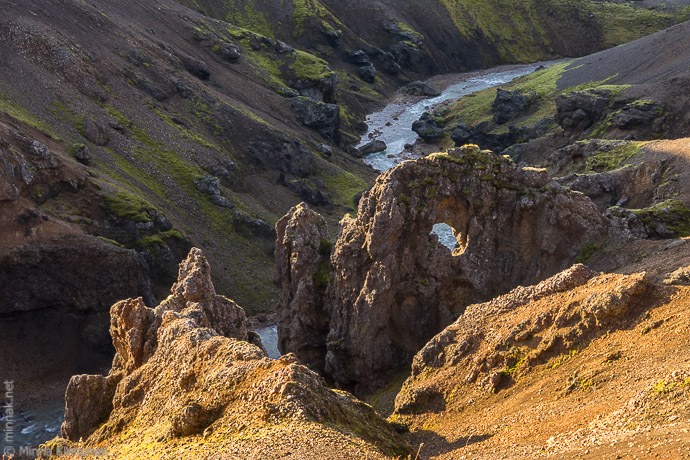 Last shot before the long drive to Mývatn